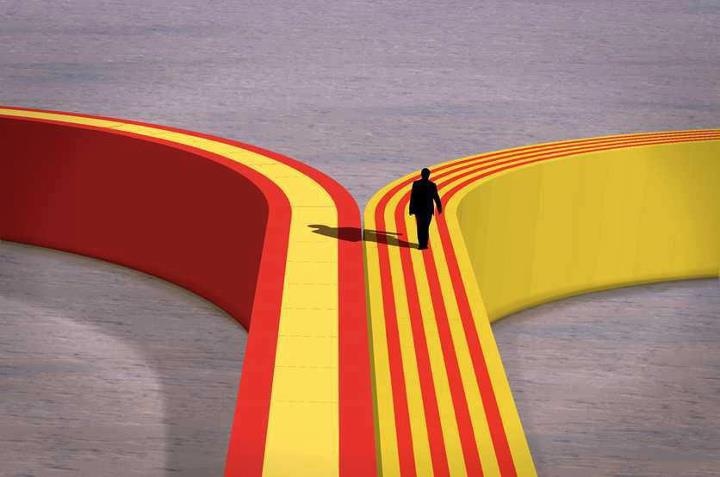 The echoes of the past Via Catalana of the 11 of last September have surpassed the covers of the following week in the press. The war of figures continues with the usual rhythm: those who are upset with the human chain have low numbers (400.000 people according to the Minister of the Interior, the Catalan Jorge Fernández Díaz). On the other, those who would like to see Catalonia as a new European state initially welcomed the figure of 1.500.000 people and now, as a gigaphoto of the Via Catalana becomes clear, there is talk of a mobilization close to the 2.000.000 people, which would mean a milestone without too many precedents.

With the swords raised, the political communication cabinets of both sides are scursing to find the best way to neutralize Or maximize the effect of the human chain. There are contaminants of all kinds, although perhaps the most notorious is the one starring far-right groups to the cry of "Catalonia is Spain" or "Puta Cataluña" in its irruption in the Blanquerna bookstore in Madrid. Polluting elements also appear on the independence side, the brainless classics that burn flags etc..

The role of the press is key to feed Or neutralize this mobilization. In the state press it would be "The Country" on the one hand and "ABC", "The Reason" on the other. "The World", for free, will always bet on the headline that helps generate more controversy, go against one or the other. Televisions reinforce their role as pro or con, and so we will have some more neutral ones such as Mediaset (Cuatro and Tele5) and other more official ones such as TVE or the group A3Media. In Catalonia, TV3, audience leader, has given maximum coverage to the Via Catalana, and so has the Godó Group to a lesser extent.

Rather than as a citizen Catalan me very striking it is the obsession of many media to make Artur Mas responsible for this mobilization. Forgive me Mr.. But, but he would have liked to have had that convening power. Mr.. But he did not read clearly the demonstration of 11S 2012 in Barcelona, he thought that a good part of that million and a half people were potential voters of his own and crashed in his electoral advance. Mr.. But it has had nothing to do with the Via Catalana. At most, may have been able to influence media coverage of the event, little more.

The Via Catalana has been a transverse movement of an important part of Catalan civil society, a movement whose main fuel has had a double source:

In the communication war what we are living, Catalonia has to lose, since he faces the world alone and with little support. The Curator Almunia, that a few months ago proposed as something possible the automatic inclusion of Catalonia in the EU in case of independence, he is championing the opposite discourse since his ears have been stretched out..

Meanwhile, messages have appeared by the social media What, by not coming covered with political color, are becoming excellent ammunition for Catalonia: the letter of a Catalan tennis player, Jordi Évole's article on the silent majority, the article “Catalunya” by Andreu Buenafuente, the manifestations of Ona Carbonell, Olympic champion… On social networks, communication that smells like a party or a media does not get the viral interest of netizens. But everything that comes from human persons, of citizens, of non-political opinion leaders, constitutes "the conversation". And let's not forget the power of a well-posed conversation.. The introduction of the Manifesto Cluetrain (1999): markets are conversations.

If the governments of both sides do not analyze in detail the transversality of this phenomenon, their communication cabinets will fire salvos, little else. An ex-Phalangist economist insinuating that Barcelona must be bombed does not scare the Catalans, On the contrary, adds new followers to leave Spain.

In Madrid I have been expelled twice from a taxi for speaking Catalan on the phone... with my daughter!! Who feeds that ignorance?, that pollution?. Communication is everything, and whether politicians are willing to avoid hatred, they can get it. Otherwise, the Via Catalana will get bigger and bigger.