Political Branding Staff? I must admit that my first clients at Personal Branding, In 2006, were active politicians. I'd rather not give names for avoiding stupid typecasting in one option or another. You know, now politics has lost the strategic position of the center and gone to extremes. That implies the memez that of the polarization of "you're either with me or you're against me".

In this writing I will tell you the origin of the crises of confidence in politics. If you're short on time, here's a one-minute video summary.

We all have values. Some of us have even bothered to find out what they are. Values are universal principles by which we govern people. They are our secret guide to how to live harmoniously in community and evolve.

There are authors who argue that values (those I also call super-powers) are innate to the human being. I prefer to think that they are also influenced by our culture, Society, Family, Religion...

How to identify your values

In the first case, you should ask for feedback. You can do it simply via email and spontaneously: Knowing me how you know me, what do you think are my top five values? And you can do it as a "pro", using a Google Form, Suggesting 20 values in a list and asking them to choose a maximum of 5. You can extract the values from this page 100 values and their meaning.

In the second case it's about you being the one who selects the 5 values that are indispensable to you.

Once you have the results of both tests, select all three matches and you'll have what we know as pillar values.

The Temple of the Values of Political Branding

Well, in the case of a politician, its three pillar values must be leadership, honesty and coherence. This graphic, that I use in my classes of political branding staff, explains it well:

On the one hand, every politician should pursue a goal that went beyond winning an election or making money. The goal, in this case closer to the purpose, should refer to a way of improving society.

On the other, at the base of the temple, we have the tools that the politician will use to achieve that purpose: Connection, Dialogue (Program...) commitment.

And on the other we have the columns, which are the values or principles that manage that dialogue with their audiences (citizens) to achieve the purpose.

The value crisis, the crisis in political branding, occurs when any of these three pillar values are non-existent or bankruptcy.

Would you be able to identify 5 politicians who have been true to these three values? I invite you to leave a comment below, and from there we will generate a debate.

Error 2 of political branding: ego is the enemy

Ryan Holiday wrote a small work of art.The ego is the enemy" (Paidós Company, 2017). Beyond recommending their reading, I prefer to advance some keys of the text to avoid the bad side of the ego (there's a good one) mood-free Spoiler:

The ego is often to blame for breaking negotiations, harmony, leadership, a lot of things in politics. But as Ryan Holiday reminds us, it's also ego control that has made it easier for Eleanor Roosevelt, Benjamin Franklin or Angela Merkel, among others, "bravely endure misfortune without the ego having made them focus on themselves".

"I've come to politics to change the world". That's how the journey of a policy professional begins. Worthy purpose. At what point do you twist? One of them, is when ego becomes the obstacle rather than on the way. "I'm in politics to line myself up," he confessed. Vicente Sanz (former general secretary of the People's Party of Valencia in 1990) in a combination of ego and oversteerity.

Error 3 of political branding: forget about the customer

Consequence of the above (Values + Ego) is that the politician, and often the party, forget about the customer. And they focus on something that the customer is indifferent to: win the next election. The customer is the citizen, It's you, we're all.

Managing policy at the stroke of a tweet is dangerous. It may have the advantage of informational immediacy, but the tweet removes the context to leave a headline that, no context, it's explosively dangerous.

In Spain there has been an impressive political confidence crisis in recent years. According to data from the Sociological Research Center (C.I.S.), the situation regarding the concern of Spanish citizens is as follows:

The chart reading is diverse. But one key is that it finally looms the cause of concerns such as unemployment, corruption or the state of the economy: politicians.

Possibly pay righteous for sinners, fortunately not all politicians have broken their pillar values, have acted moved by the ego or forgotten the citizen.

Spain is undergoing a serious process of childling politics, and because of this the top political leaders are unable to sit down and negotiate what is best for the citizen. Instead, just look at the short term of an election victory. And in the meantime, many laws follow in the swamp, extended and outdated budgets because they do not find majority to approve them. There's a clear loser: You, Us. Citizens.

The case of political stagnation has driven the publicist and tv presenter Risto Mejide to collect signatures to found a new party: The PNLH (Worst We Won't Do It). If you get the necessary supports, Spain may have in the future someone who respects a system of values, don't put the ego ahead and put the phrase of Charles de Gaulle in value, Prime Minister of France between 1944 And 1946:

Let's not lose hope. The personal political branding it can be a way for those who start. In case you know any groups of candidates (Ideally 20) who truly believe in politics with the focus of citizens, send him this infographic, it's from the workshop we developed hand-in-hand with my Mexican partner Nancy Vazquez. Download it in PDF in good resolution here: Infographic of the Political Personal Branding Workshop. 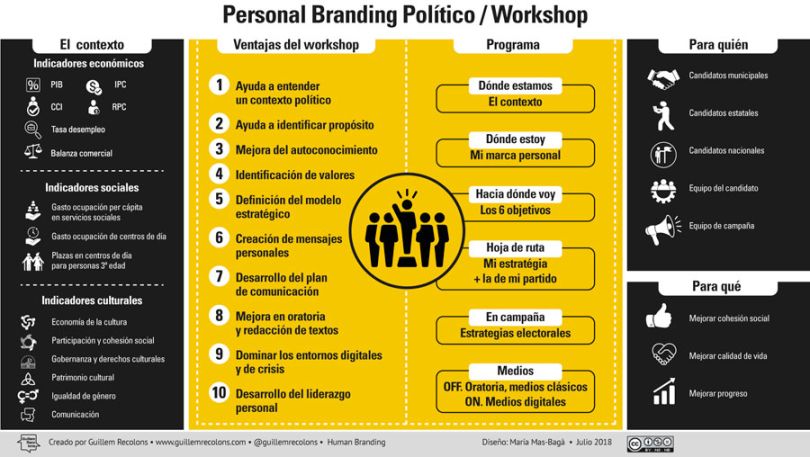