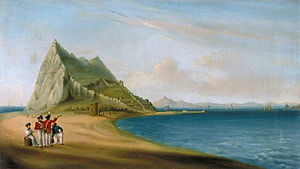 A few days before the election, President opponents accuse him of sexual abuse of a minor who was visiting the White House. The strategy to avoid the scandal is raising a smokescreen: invent a war with a country virtually unknown and not very important to most of the American people, Albania.

It sounds? Why not, This is the plot of the movie "Wag the dog” (Smokescreen) of 1997, Barry Levinson directed and written by David Mamet and Hilary Henkin.

This Hispanic political summer has surprised us with one of the biggest smokescreen known to our species: The drama of the rock. The story is very well orchestrated:

Strategy: Direct the attention of the Spaniards to another issue that will emotionally affect their patriotic sense. Create a threat to the interests of Spain.

Proposal: A conflict around the Rock of Gibraltar, British sovereignty under the Treaty of Utrecht (1713), a gift that made the Bourbons to the English Crown to invade Barcelona without too many casualties.

Background: In his day, Aznar managed to hang rojigualdas thousands of flags on balconies thanks to the defense of a stone called "Perejil" which had been occupied by hordes of Morocco. The unit of Spain was in danger. The action was successful at all levels, and he ended with a "take" island style "SWAT".

The perfect excuse. Spain's government needed a trigger, and I was fortunate to face when the 24 and 25 July this year, Rock authorities released water concrete blocks with the idea of ​​creating an artificial reef, putting obstacles to the fishermen of La Línea de la Concepción and Algeciras.

The execution: Two days later Spain exaggerated intensified customs control at the gate, which it caused huge queues of several hours that the Government justifies affirming that these records are their obligation, because the Rock is not part of the Schengen area and so UK and Gibraltar have strongly protested. As they say in Italy, "We made it" (and we Bundled).

The reaction: The communication manual began by page 1. The pro-government media (The reason, ABC, RTVE, Antena 3 ...) They gave the advance and warned of a new threat to the unity and sovereignty of Spain. Then the matter has occupied front pages nationwide, culminating an excellent and well-orchestrated communication strategy "Wag the Dog". It is true that not all means the same treatment given to the news, The Sixth and the world have remained faithful to the subject Barcenas, and perhaps also the "separatist" Catalan press.

Political communication cabinets typically work with three major formats to avoid attention on an issue. By order of effectiveness:

The smokescreen, already mentioned, It is the great tool:

euphemistically, that old friend. Some examples:

The "it does not touch", a tool booming. Examples:

Either way, Summers always find news context to help ease tensions of various governments. When summer brings a few fires, Few accidents in traffic and few drowned in the sea, political gale is secured. This summer 13 We remember him for that piece of stone (English call it "The Rock”) we call Gibraltar, a curtain of thick smoke.

Internet standard is no standard

Nokia SRES Now how I can use the tagline “Connecting People&#...
Scroll to top