I'm not used to reblogging third-party items, But “Don't cry for me Argentina. Cry for you” economist's Xavier Sala i Martin it is mandatory to know the partisan and family interests that lie behind the decision to expropriate a 51% Repsol. There I leave you with this pearl, which in fact comes from an intervention on the RAC1 radio station of the past 17 April. 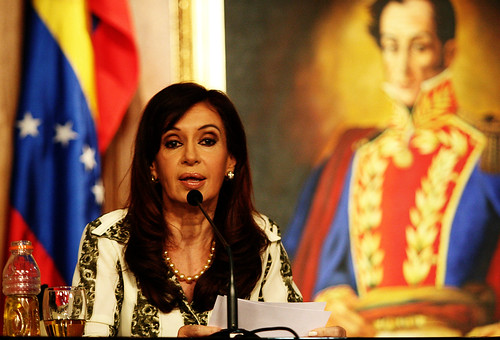 Don't cry for me Argentina. Cry for you

Let's see if we understand each other. It is true that Argentine neonationalism has played a role in Repsol's expropriation, it is true that naciolism appears with furious violence whenever the government needs to camouflage serious problems (and the Argentine government is no exception) and it's true that nationalization is going to hurt, Essentially, argentina (and here the only one he's ever hit on the head is the mayor of Buenos Aires., Mauricio Macri, who seems to be the only sensible politician in the whole country): yesterday I wondered in public if the one who had shot himself in the foot was Froilán, King Juan Carlos or Cristina Fernandez de Kirchner. The answer is… All three at once!

This is all true., but it seems to me that Argentine citizens should start to see that their political leaders not only use nationalist populism to earn their sympathies, but they're corrupt thieves who steal their country's wealth. The nationalization of YPF has nothing to do with the energy needs of the people but with the incompetence of Ms Cristina, eager to hide nefarious management and, especially, with the CORRUPTION of their surroundings… and that of your son Maximus.

The story begins between 1992 And 1999, when Carlos Menem's Peronist government (from Kirchner's same party) decides to privatize YPF due to the company's huge amount of losses. It was a time when the company was mismanaged (like almost every public company around the world) and the price of oil hovered around 15 dollars a barrel. Spanish company REPSOL, then directed by Alfonso Cortina, bought YPF from the Menem government (Repeat, from the same match as Kirchner).

1999 it was a time when "Spain was doing well". Do you remember that? It was the Spain of the ball, of the new-rich stickers who gave management lessons around the world and of government presidents who smoked cigars with their feet on the table. That arrogance was etched in the minds of many Latin Americans who have waited years to collect their moral debts. To all dog has its San Martin (not his Sala i Martin, which is a different phenomenon) and it seems that Spain has had the time to pay the humiliation to which it treated the citizens of Latin America.

That said,, and accepting the rich arrogance of the Spaniards again, the truth is that REPSOL paid (Repeat, Paid) the price the government asked for for the ruinous company: 15.000 millions of dollars. The merger was exemplary to the point that the Financial Times magazine awarded REPSOL the annual award for the best merger of the year.

In addition to these 15.000 initial millions, REPSOL has invested a total of 20.000 millions of dollars between 1999 And 2012, including some 3.200 millions in 2011. 20.000 millions in 12 years is not a small investment, say what President Argentina says. In fact, one of the results of these investments has been the discovery of Vaca Muerta deposits that can deliver extraordinary economic results even though the quality of the oil deposited there is yet to be seen.

In 2007, and already with Antoni Brufau at the head of the oil company, President Nestor Kirchner asked REPSOL for an Argentine group to join the company. It was the Petersen group of Henry Eskenazi's family. The Eskenazi family was a family of the high bourgeoisie of Santa Cruz, region that had been presided over (Oh! Chance!) by Nestor Kirchner, before he became president of Argentina. In fact, Enrique Eskenazi was a close friend of Don Nestor, so intimate that it had funded the election campaigns that brought him to power. I mean, President Kirchner forced 2007 REPSOL to accept an Argentine partner who, Casually, was a lifelong close friend and who was owed some political favors. Antoni Brufau accepted because I knew it is always good to have local investors with political connections. It's good that the insiders signal you the existence of amber lights before they turn red. This is why he accepted that the Eskenazi family first have the 15% And then the 25% company.

But there was a little problem: the Eskenazi were the rich of the people in Santa Cruz, but it's one thing for your kids to wander around town in luxurious red Ferraris or chuleen in the trendy nightclubs in the area and another very different thing is to buy the 25% of a company worth tens of billions of dollars. The Eskenazi weren't that rich!

How does Kirchner's friendly family get to buy the 25% REPSOL-YPF? Well, forcing YPF to LEND YOU THE MONEY! Repeat, Nestor Kirchner forces REPSOL to lend the money to a friendly family so that it can buy the 25% REPSOL. And how is that family going to pay such a millionth dollar amount? Well, with REPSOL's own dividends. I mean, Repsol, Kirchner's government and the Petersen group of the Eskenazi family sign a contract (deposited at the Security Exchange Commission in New York) that forces REPSOL to give the 25% from its capital to the Eskenazi family and it undertakes to pay back with REPSOL dividends. To ensure that REPSOL can collect that “Credit” (or maybe we should call it extortion), REPSOL is required to distribute in the form of dividends the 90% of its benefits.

I mean, when Mrs. de Kirchner accuses REPSOL of not earmarking a greater share of its profits for oil investments and prospects, doesn't explain that her husband (Repeat, HER HUSBAND) had forced REPSOL to use the 90% of the profits to pay dividends for your friends (Repeat, YOUR FRIENDS) appropriate the 25% REPSOL when they didn't have a dollar to buy such a lot of stock(*).

But it doesn't end here.. Mr. Enrique Eskenazi places his children in the company (in particular, places his son Sebastian as vice president) and instead of acting as the local partner who plays the important role of alerting amber lights before the red lights appear, behaves like a real incompetent mobster who does little to defend the interests of the company he runs.

Gradually, REPSOL sees that it has gotten into a lot of trouble and that local partners play more in favor of the politicians who have placed them in office than in favor of the company they represent and soon rumors of nationalization appear. These are the last days of 2011 and REPSOL has discovered the potentially millionaire vaca Muerta deposits. The rest of the story is already known. Cristina Fernandez de Kirchner, remoted by economist Axel Kicillof(**), Marxist academic, Champora-era mentor (association created by Nestor Kirchner) and close friend of the president's son, Maxim Kirchner Fernandez, announces the expropriation of the 51% REPSOL-YPF. "Interestingly" the 51% expropriated actions come from the 57% which is owned by Spanish partners. Exactly the 0% comes from the 25% that Argentine partners have, Dad Kirchner's friends, the Eskenazi family (and also expropriation 0% US investment fund that owns 17%… and remember that happens three days after Mrs. Cristina met with Obama to “Negotiate” the subject).

The big problem with REPSOL's expropriation is that the response of the Spanish government, presided over by Don Mariano Rajoy, it's going to be necessarily weak. Spain is an impoverished country with very little bargaining power and no ability to pressure its (Theoretical) Allies: European Union and the United States. Both are less eager to help their Spanish "partners" than to be accountable for the arrogant attitude of Spanish presidents (Aznar and Zapatero) they didn't get lessons long ago when things were going well. And I say that's Spain's big problem for two reasons. The first is that Argentine leaders, seeing Spain's weak reaction, you'll see your ego grow at the same rate that diminished when Thatcher's England humiliated you in your stupid Falklands campaign and with your inflated ego will increase your expropriation thirst or your anti-sleep revenge with REPSOL: seriously think about expropriation of other Spanish companies such as Telefónica, Santander or BBVA. We'll see.

The second reason the YPF show is a problem for Spain is that the other Latin American governments, equally wounded by the Spanish neocolonialist arrogance of the 1990s, are watching. And Argentina's cravings for revenge can spread to the rest of the continent. We'll also have to wait and see how that evolves.

Meanwhile, the crisis has turned Spain into an economic corpse that will induce scavengers around the world to feed on their offal: the Argentine government will follow its squeals threats, the rest of a humiliated Latin America will not be left behind, But that's not all: Chinese oil companies will attempt to exploit repsol's deposits that Argentina cannot afford to explore, American banks are going to fill the gap left by Santander and European multinationals, Yes, Yes, those of European partners and brothers, they'll be lurking, attentive to taking any part of the business that the incompetence of Spanish leaders leaves un defender.

(*) Everyone knows that, for more than now Mrs. Cristina will drop the tear when she talks about her late husband, Mr. Kirchner had been living separate and parallel lives for years, very much in the direction of the kings of Spain, where the monarch is going to hunt elephants (or they were elephants?) to Botswana while his wife goes to get Easter eggs to Greece and when she learns of his accident, it takes five days to pay him a visit… of the 20 Minutes!

(**) Axel Kicillof is the radical paleo-Marxist who has managed to eclipse Minister Amado Boudou, who tried to ban the books of Sachs or Samuelson in Argentine universities for being "neoliberal". Kicillof's professional life, a teacher of 41 Years, has been that of a sniper from the University of Buenos Aires, where he specialized in the history of economic thought. Al doctorar said Keynes was a radical thinker distorted by bourgeois analysis. For him, Stiglitz or Krugman are almost as neoliberal as Mankiw or Barro. You see! Maxim Kirchner's close friend and the ideologt of expropriation. With these intellectual leaders leading the Kirchnerian counter-revolution one must say that, even though the YPF episode is an indication of Spain having problems, the serious problem is not in Spain but Argentina!