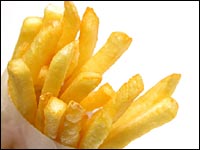 The Harvard School of Public Health has conducted important research on the origin of gradual weight gain in adults. There's really nothing new under the sun.: red and processed meats and refined cereals take the palm. But there is one fact that strikes me powerfully.: The food that fattens the most are french fries (followed by chips). This is serious.. The results of the study were presented last month in the prestigious journal The New England Journal of Medicine.

From this point to the health authorities of all countries they are opened three possible Scenarios as for the treatment to be given to the potato chip:

I think the first two scenarios don't require much explanation.:
The stage 1 would be the logical, that of the hot reaction of the politician lacking in ideas. A great campaign on a national – or international scale –- similar to that of “Tobacco kills” with macabre photos of putrid organs, blaming us all for the unhealthy occurrence of eating chips!! In this campaign we would get tired of seeing data on how an adult regularly gains weight and is heading towards a silent death derived from the diseases that obesity brings.: Infarcts, cancers of all kinds, miscellaneous intestinal disorders, irreparable damage to the bone skeleton due to overload etc..
The stage 2 already identifies us with a smarter politician, that before acting in hot weighs the reaction that the different collectives would have, a possible unfavourable evolution of the vote, and these important things that must be measured before dropping the bombshell. This is a more discreet campaign, that indirectly reaches the final consumer, and that uses the figure of the prescribers to try to curb the growing patatophilia. The doctors would receive a dossier from the health authorities with a set of recommendations for families around the moderation of the consumption of chips, alternative foods, dietary guidelines, tests etc.
But… What about the scenario 3?, What the hell does that mean about a lateral treatment to the potato chip??
Look, normally these ideas I usually charge, but it turns out that as a child I was the guy who ate the chips of the other three classmates at my table who didn't want them.. In return, of course it's, I could get rid of the sole-shoe steak or recycled cauliflower from the previous day. It was a good deal. I was such a patatero that I didn't care that the paratas fritas were of negligible invoice. Go, that the subject of the potato chip has touched my marrow. And that is why today I feel generous in giving the authorities this idea that I now expose.:

THE BIG DAY OF THE POTATO CHIP:

Background : There is a regular consumption of chips very widespread in the western population of the planet. In addition to your home use, the potato chip has sneaked into every fast food restaurant, Belgians take them with mussels, the English with fish and in Spain, without going that far, starry eggs have become popular thanks to Casa Lucio, a unique formula for charging from 12 20€ for a plate of fried eggs with chips (I love marketing).
Current situation: That runaway consumption of potato chips has been one of the biggest culprits in adult obesity., and that's why, according to the aforementioned study, to which “starches and refined carbohydrates have similar effects to sugars in the body. Are quickly absorbed, cause spikes in glucose and insulin in the blood and do not induce satiety signals as effectively as other foods. For all this, encourage you to eat more at the next meal”.
Objective of a lateral approach towards potato chips: Achieve the reduction of consumption by less taxing means than those mentioned in the scenarios 1 And 2.
Lateral strategy: Implementation of one day a month dedicated to potato chips. Campaign title: THE BIG DAY OF THE POTATO CHIP.
Basic roadmap:
Negative effects Who can be negative about the BIG DAY OF THE POTATO CHIP?
You always have to look 360º. It is true that there may be groups harmed, but less than it seems.
For example, The country folk What are they going to do with the tons of potatoes they produce now?? A short is a problem, but let's think that in the long run they will replace the consumption of potatoes with that of other healthier products, like carrots, tomatoes, beetroot, onion… Fast food resaturants will need to quickly find a substitute for potato chips and interesting plant-based recipes fit there., whether they are grilled, fried or whatever you want. 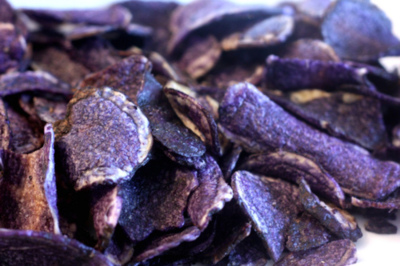 And the chip manufacturers, potatoes?. Here the thing is more complicated, but you may have good solutions in the long run. For example, could package (already exist) combinations of fried or baked vegetables and wait for the BIG POTATO DAY to fill markets and bars with chip bags. That's for sure., in return I would ask you to please remove those ham-flavored potatoes, to onion, pepper. They all taste like glutamate and adulterate the geniuno flavor of a chip.

Conclusion: One madness? Possibly. But we would increase the perceived value of the potato chip., raising it to “luxury item” and therefore with a more occasional consumption. We would get higher quality chips, of ecological cultivation, and fried in a good olive oil. Would they be more expensive?? Of course. Do you give us oysters, caviar or foie gras?. But what we would achieve, especially, is to wish for the great day of the potato chip.