One of my clients' recurring questions about Twitter is how many people they should follow. I always say the same thing Do you have an area of interest or several? If you only have one, there's no problem managing the people you follow, but if there are several, Twitter devised the “Twitter lists“. A fabulous invention that allows you to rank the people you follow. 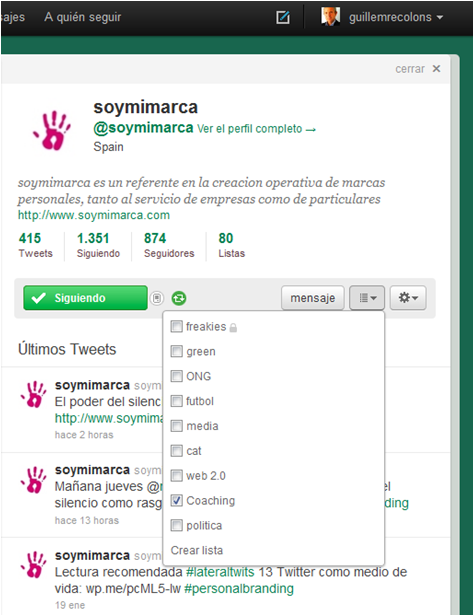 What are the lists for? To be something more selective in what you read, depending on the timing and interests. Let's say you follow a lot of football-related people and companies. Not bad, in the lists menu you create a new call “Football” and there you go by ranked the people you follow who talk about football. When you get to your Twitter you get the global comments of ALL that you follow, but if you want to see only those who talk about football, you click football list and you will have on your screen only the twits related to that theme.

Lists can be public or private, you'll see that Twitter gives the option. If you're too secretive, you can make them private, or you can also create private lists with “freakies”, “Foolish”…

Go on and on, you'll be followed. don't pretend to have a large number of followers if you don't follow anyone. Being on Twitter implies a certain “Fairplay”.

You see it., Twitter can manage as a large database - public or private- thanks to the lists.