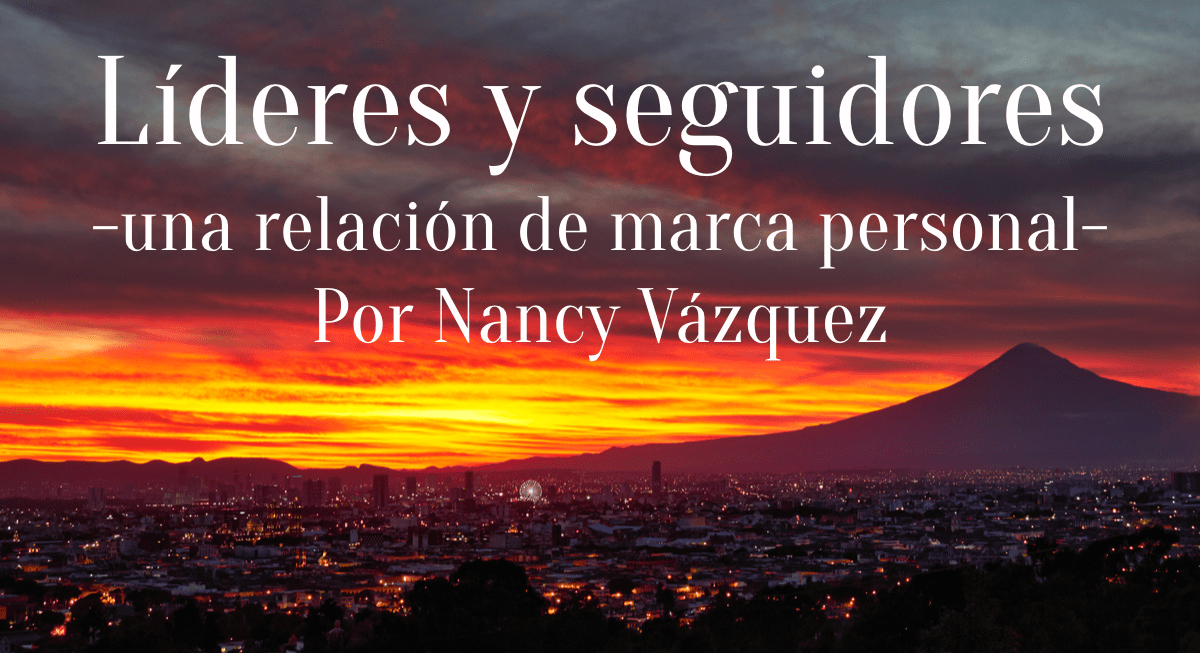 I had been following Nancy Vazquez and the Integra Personal Branding of Puebla, Mexico.

I remember an old man announcement of 1994 by Renault which spoke of J.A.S.P., acronym for "Youth", Although Amply Prepared". And that's what I saw on that team and in Nancy.

In August 2017, I had the opportunity to give a lecture in Querétaro (Mexico) for the leading insurer mexinaca GNP. When I finished, I didn't think twice. I crossed two states and arrived in Puebla de Zaragoza to personally meet Nancy and her team.. It was wonderful.

That's why I invited Nancy to participate in the 3rd edition of the Personal Branding Lab Day at 2017, the first online edition and, therefore, truly global. And I also invited her to write in Soymimarca's blog.

That's why Nancy and Alan invited me to become a partner of Intregra. That is why since then we have collaborated in many training projects, Consulting, Events, Articles, Courses...

That's why today, in the campaign #Collaborating WithGuillem, I have the great honor that Nancy is my guest blogger, and also, dealing with a topic that I am passionate about: the relationship and influence between leaders and followers... unilateral? bilateral?

If you've missed previous collaborations, here we have the Vladimir Estrada, Ylse Roa And Paul Adam.

To be good leaders, we must be good followers

In our day to day, much we can hear and read about leadership. We easily find definitions, tips to improve our leadership as a skill or ability, documentation, Books; there are countless resources on this topic.

We can even hear from good and bad leaders, of everything they do or don't do. We see in the online environment the "influencers", guides, Mentors, Etc., who exercise a certain type of digital leadership, and who are surrounded by thousands of followers.

In our personal and professional context, we can identify maybe our boss, Customers, Collaborators, employees or others, who exercise a certain type of "authority" role in certain situations.

And at this point, it is important to stop and reflect: What is leadership really about?? Is it something only about companies or social issues??

Well, in a simple way: will direct or guide others according to a common goal or vision.

We can consider that the most widespread and accepted concept is that this is a natural process of influence that occurs between a person who leads and another who follows.

"Process of influencing other people and supporting them to work enthusiastically towards achieving common goals".

The elements that make up the concept of leadership are:

Leadership requires two key actors: leader and followers, and the style or type of leadership chosen by the former, has a close relationship with the maturity of the latter.

Leadership is about others, for this process to take place, it requires 2 Elements. Personal branding also requires others: without the other people it has no meaning or objective.

Leadership and personal brand are always accompanied, go hand in hand and are key to achieving goals in the personal sphere, professional and social.

Leadership is all about the ability to influence, motivate and organize others, in order to carry out actions to achieve a common goal. Leadership and personal branding allow one person to stand out from the rest, they allow us to have clarity of what distinguishes us and makes us different.

In recent years, the terms Leader And Followers have gained relevance, especially in the digital environment; in a sense, what we know as "influencer" can be considered as a leader, as it has the ability to influence others.

The fact that leaders are more visible than followers, gives them greater focus and priority in the development of tools and content; often ignoring the role of followers in the successes and failures of organizations, Communities, and even in certain erroneous behaviors of the leader.

In the digital environment, we can see the level of influence that exists on the part of the followers in the leader; For example, in the process of content creation, that even being more or less clear as part of a personal brand strategy, may create bias, or a crisis of acceptance and credibility.

Often, in these cases, the follower consumes the leader's content for its authenticity, but at the same time, this leads you to make changes in your behaviors and contents, to later reproach these changes and stop following it.

Leadership is a two-way relationship between the leader and the follower; there is no way that this relationship and mutual influence does not exist during the process.

Within organizations, communities or leadership environments, is where the leader is recognized from his behaviors, skills and interactions with others and with its atmosphere, in order to achieve a vision or a group of objectives together.

In principle, there is an influence on the part of the leader; since in the process of leading, the leader first communicates his ideas, followers accept them and are motivated to support them, and make the necessary changes.

This relationship of influence between leaders and followers, means that the acts and attitudes of the latter, influence the person who is in a leadership position.

The leader-follower relationship forms an integration: one depends on the other for its existence and meaning, and together they can achieve a shared vision.

Can a person actively accept the role of follower??

A person can exercise that role consciously or unconsciously., according to the type of situation you are facing, as for example, a job; where you are aware that you have an authority figure. Or simply, as another example, follow someone on social media to consume their content.

To choose to be a conscious follower, critical and independent thinking is required, as well as manifesting an active participation and having clear objectives.

Think critically and independently, requires being aware of the effects that personal conduct and that of others has on the purpose of achieving vision in the leadership process in an organization or community; clarifying the effects that people's behavior has on the chances of achieving goals, making constructive criticism and contributing their creativity in favor of achievements.

A good follower will be the one who takes the initiative: will assume its responsibility, actively participate, you will know how to get going, and will not be limited to anything.

The ideal, would be the majority existence of positive followers who contribute to the leader, but the reality is different; that is why it is important to identify the types of followers that exist:

On an increasing scale based on your level of commitment to the leader, followers can be:

For these researchers, followers act as a main variable in the exercise of leadership. In certain cases, their role is of paramount importance to act in the specific situation, and sometimes, more decisive than the leader's performance.

As I mentioned earlier, little is said or worked on the role of follower; there are few contents or tools that guide us to the good development of a follower.

At this point we know that the follower plays an equally important role as the leader in the leadership equation, since this directly influences the behavior of the leader.

Just like the leader, the follower projects a personal brand that generates an impact on the leader and the leadership process. That's why, it is important that the person in this role is aware, First of all, of your personal brand, and later of his role, so you can act more accurately.

As for the choice of follower role, many people may choose it with the intention of evolving and becoming leaders, but many others may not find out in the short term and choose to simply be members of a community.. In either case, it is important that they can manage their personal brand to achieve a certain and favorable result.

Following is the first way to lead

The Path to Leadership Begins, and continues, demonstrating a great ability to track.

Leadership requires mastering dual roles, both the leader and the follower. The first to consider of the two is that of the follower; the skills to be a great follower are so important, because they teach us a vital first principle of leadership: the service.

Become a conscious follower that each step will contribute to your leadership role. Team members and employees who learn to follow first, learn to serve the needs of their leaders.

Being a good follower shows that you recognize that leaders need teammates who share their goals, that are ready to give something additional to what is expected.

Tracking means learning your leader's style, to express your opinion, to represent your interests, and to accept various tasks necessary for collective goals to be achieved.

Follow-up is a constant activity of leadership, because everyone has a boss or leader. The sooner and more consistently you prove to be a great follower, faster your reputation as an effective member of your team or community will grow, and you will get a promotion as soon as possible to the level and type of work that you are passionate about.

A great following begins with the action of fully committing to the ideology of the company or community you join..

Study culture, take note of what your leaders and others are and do, while communicating and advising. Collect and learn techniques that are consistent with your style, and adapts others that work in such a way, that are suitable for you to use.

Don't forget that you're always building your leadership toolbox, because as I told you before, everyone has a boss, or a leader.

Be a good follower

To be good leaders we must be good followers.. It is important that we consider the first role that can make us a good leader.: to continue and be at the service of others, which allows us to create a broader view of leadership, and the solutions that are needed around us.

Big fans see themselves as part of the group, as one of the many facilitators of the team; and a great facilitator plays various roles. Every good leader leads a process of constant development and improvement.

To be a good follower:

Remember that to lead is to serve, and to serve is important:

Owe recognize the difference between your obligations as a follower and as a leader, and develop the skills needed to be successful in both roles.

Effectively serve those at the top, down, and to the sides with respect to your position, it will give you the reputation of being a powerful member in any community or company, thus strengthening your personal brand.

Loyalty is a powerful force for your personal brand. Over time it will bring you respect, improve your reputation and expand your influence.

Loyalty, However, it must never come before integrity or ethics, don't follow anyone. Learning to be a loyal follower is a fundamental part of good leadership.

If you want to listen to it, here's the episode 69 from the podcast Todo Deja Marca, In iVoox, Spotify And Apple Podcast.

Personal brander, mercadologist and co-founder of Integra Personal Branding
My mission is to support entrepreneurs to find the essence of their brand, give it a voice and transform it into experiences.
Choose your path. Be you. Be authentic.
integrapersonalbranding.com.mx