personal brand and courage are concepts that, as we say today, maridan perfectly. And it's not easy to find. Today I speak of Marta Reina, a brave woman who took a crucial step in finding your true self.

I met Marta 10 November, in the tests of TEDxLleida 2016, Templar Castle of Gardeny in Lleida, an enclosure of the newly recovered SXII. Marta was in full trial and nerves consumed her to the point she could not do on stage.

But Marta is not a novice in these conflicts; as he confessed, recent years has flown numerous times to discuss his specialty. It's a cop from 2002 and recognized legal expert witness in documentary and expert falsity falsity of transnational crimes on intellectual property by Interpol.

Why was nervous Marta? possibly for the same reason that they were the speakers who told personal stories of overcoming, why Marta was about to tell the world the great step taken to move from Santi Reina Reina Marta. Why not, Marta is trans, and a discrete person, discretely dresses, speaks discreetly.

But no one gets wrong, discretion has not prevented him perfectly combine personal brand and courage. He had the courage to pass from Santi Marta, and the courage to defend the rights of trans people in every conceivable forum. It has had to endure the intolerance of those who think they're better for the simple fact of being heterosexual or, as sometimes you heard, normal.

Marta, Among the many barriers found in its path, Has been lucky. The Autonomous Police Corps, Catalan police, he was with her from the first moment. This support is crucial for this woman to continue developing its policing throughout Europe and assume its new role as spokesman for the trans collective. personal brand and pure courage. 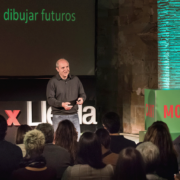 And you? Have you already found your superpowers? #TEDxLleida16
0 replies

How to enhance your personal brand on Linkedin
Scroll to top