I read in Amazon and in several blogs the next review of the book “Never eat alone” of the Keith Ferrazzi: 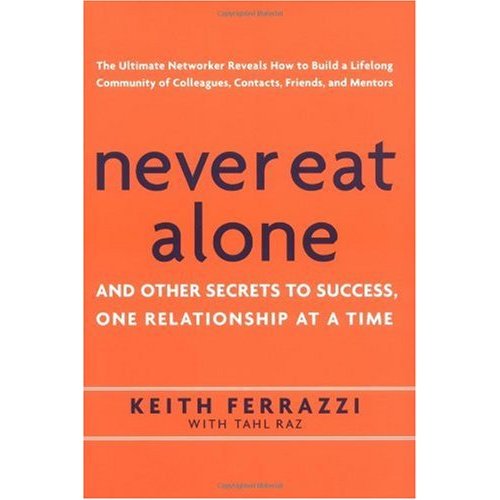 Keith Ferrazzi is the youngest partner in the history of Deloitte Consulting and founder of the consulting firm Ferrazzi Greenlight. In the book, the author intends to differentiate himself from the classic techniques of handshake and the rain of business cards.

Unlike other authors, Ferrazzi doesn't have an army of contacts that help him achieve his purposes with just moving a finger. In fact, throughout the book he insists that having that network of friends has cost him to do more favors than to receive them, sometimes working for free for nothing.

Ferrazzi tells us about his experience from the point of view of someone who has a hard time making friends. For Ferrazzi, being the icebreaker is complicated, remembering the names of the people you met at that event is complicated, maintaining relationships is complicated... but there are some "tricks" out there that make the task easier.

Ferrazzi talks about networking as a natural process. In fact, he mentions that he has never attended a networking event because he believes that relationships are forged not on common interests, but between common passions. One makes an extra effort for the one he considers his friend (with whom he shares passions) and not by an acquaintance (who only joins interests).

An interesting vision seems to be a defense of offline relationships.