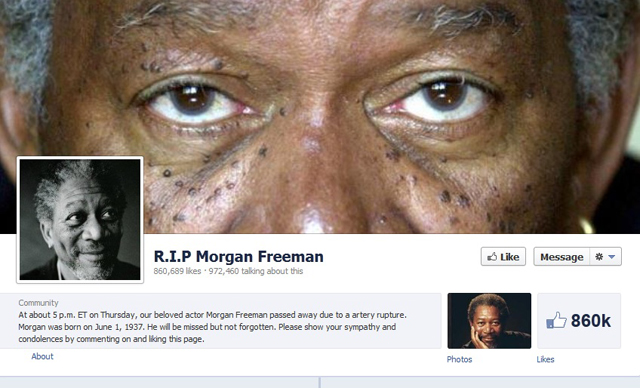 The strange case of false deaths on the Internet

From time to time to this part it is not strange to hear or read the news that such famous, actor, musician... is dead, and then it turns out not to be true. Did it happen to you?

Perhaps one of the most sounding and repetitive cases has been that of actor Morgan Freeman, and hence the title of the post. Looks like Freeman's wanted to see him dead, and year after year they're announcing his death.. The day the great Freeman really went through, we won't believe it until we see the picture of the corpse and the family watching him..

But… Why do you obey to "kill" virtually a famous? What kind of person does it? What makes you win?

In each case the deceptions have been created without following a different pattern from the pure whim, to the mere notoriety of its creator. I read a few days ago in the NYT that an Indiana University professor named Mark Bell associated patterns of false deaths with which people like to lie. There seems to be an emotional reward in the form of dopamine overdose when you manage to massively deceive people, and even more so after the anonymity of social media.

Believe it or not, there is a official generator of false deaths online called "Fake a Wish" where you can generate the death of whoever you prefer, and provides you with credible causes of death depending on each character.

For example, Morgan Freeman was credited with an aneurysm. The way to announce it is diverse. From creating a Facebook page to a simple Tweet. But it must be well worded to be credible. Something appeared on Facebook:

Around 11am today, our beloved actor Morgan Freeman has died of a coronary obstruction". Morgan Freeman was born on 1 June, June, 1937 in Memphis. We'll miss him., But we'll never forget him. We ask that you show your solidarity and condolences through your comments and likes on this page

False deaths are not an internet-exclusive phenomenon. The oldest known case is rumours about the death of Mark Twain In 1897, that he himself was in charge of dementing with a great phrase.The announcement of my death is an exaggeration". There is also the legend that Paul McCartney died in 1966, and since then the one who bears his name is an imposter.

Whatever it is, The Internet brings us a speed of spreading information that causes the news to reach the environment of the false dead in a few minutes and generate a sense of indescribable chaos.

Using hashtags on Twitter or Facebook helps generate an even more fantastic story, like the singer's case Justin Bieber, who was killed in nightclubs, has suffered terrible traffic accidents and also drug overdoses.

The curious thing about the case that there is absolute impunity for those who create and circulate these false rumors. There is no legal framework to prevent virtual killers from continuing to act.

In Spain, even if it's not the same case, during this 2014 we've experienced two deaths ahead: the dead man was still alive but social media was already dead. Such was the case of former Spanish Prime Minister Adolfo Suarez and former coach F.C. Barcelona Tito Vilanova, whose death took for good a day early. Unfortunately, in this case it was real deaths. Rest in peace.

How do those affected by a false death take it?