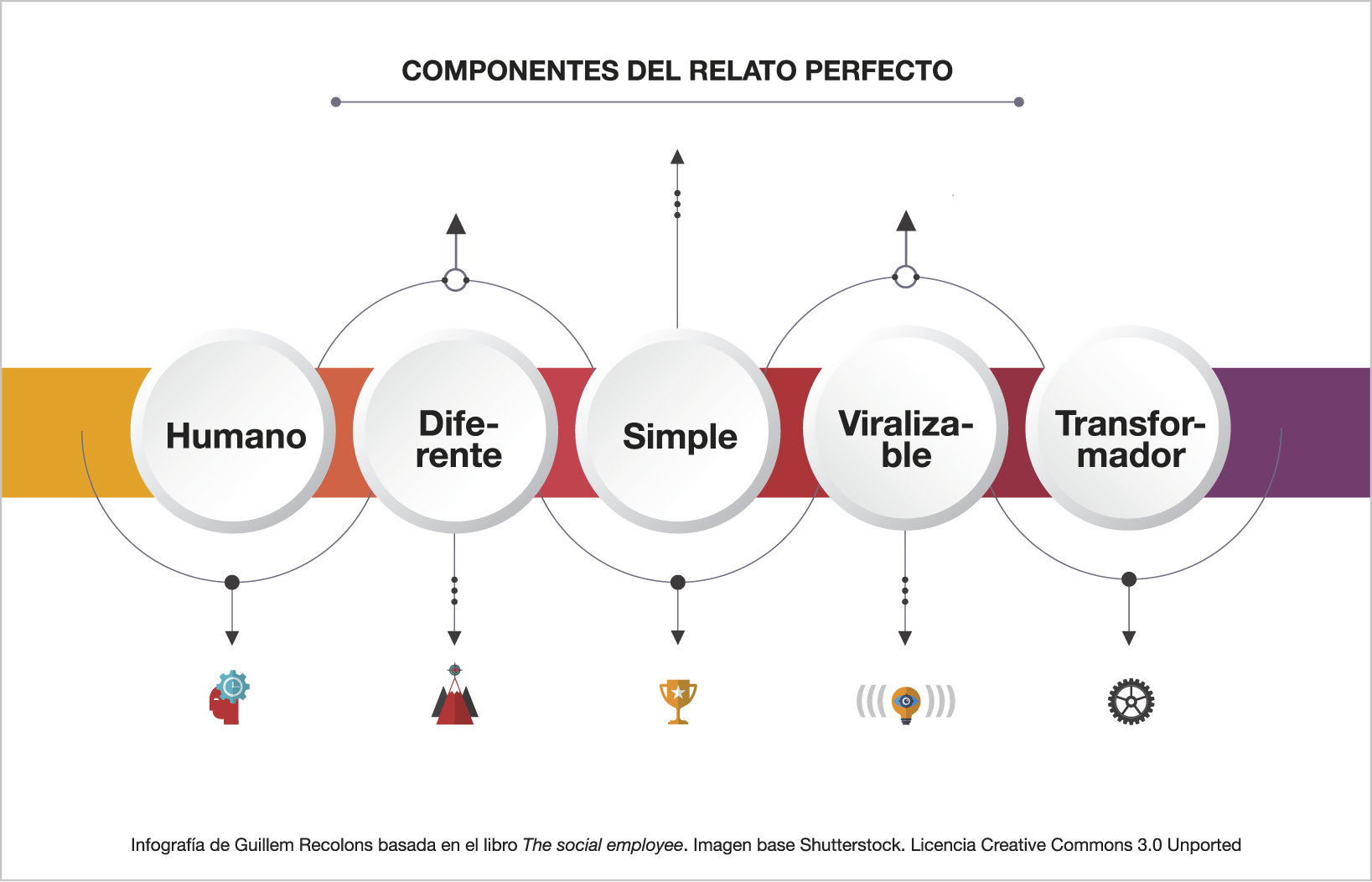 Can anyone say that a story, as well-counted as it is, it's unbeatable? Perhaps a perfect story?

I've been following the greats of the storytelling, reading his books, going to talks (the ones I've been able to), reading articles, attending workshops, soaking me of the best Ted. I have even given my own workshops on the subject and some other presentation. Deep down, the story is one of the most important message formats in the management of our personal brand given its ability to connect.

Is there the perfect story?

Like you, from a young age, stories captivated me. First the stories, and storytellers. Years later, I dedicated myself to advertising to help tell stories (that's yes, with sponsor). I could talk about a dozen ads, books, songs, of films and works of art that would be close to the perfect story. From my perfect story, Of course.

There are countless examples of excellent personal account in the speech of Martin Luther King “I have a dream”, in the final speech of Chaplin in “The Great Dictator”, in graduation speeches such as the one in Steve Jobs at Stanford, the one J.k. Rowling at Harvard or the Emmanuel Faber at HEC.

But it was reading the book “The social employee” where I found a story I would swear that contains all the ingredients that make up that story, That storytelling Perfect.

The Chipotle case, content marketing in its purest form

Towards the end of the book there is a chapter dedicated to how content marketing can empower employees in an organization. It's about a success story, that of the Mexican catering and catering brand Chipotle Mexican Grill.

The campaign they created in 2011 name Back of start (back to the beginning) relates masterfully through an animated video the brand history through their Values. It is a brand that advocates for sustainable agriculture and livestock. Not everyone, though. comulga with this message, the video goes straight into the emotional cortex, with a clear message, Resounding.

Chipotle's original idea was to simply leave it in a Post YouTube. But it went viral, which shows that a video's ability to spread like a plague is only due to excellence, not to desire. He started winning awards and creating high-quality debates and also controversy. Obviously, competition attacked sustainability in brand values. It became the most-watched TV ad in the US. USA, though it had not been conceived as such.

One of the key ideas, according to The social employee, is that of the “contributing consumption”. It is based on the need for many consumers to think that they are “doing good” with their purchasing decisions. We know that, effectively, as consumers we like the idea of commitment to something. And it doesn't necessarily need to be a cause like breast cancer or poverty. In food, it can be something as simple as integrity. If you've seen Emmanuel Faber's video (CEO de Danone) I mentioned earlier, the commitment to a cause such as social justice can be behind a big mark.

I don't want to keep you on your toes any longer.. If you don't already know the campaign, here's the video:

The components of the perfect story

This chipotle example goes as a ring to the finger to structure what could be the component scheme of the perfect story. And if you'll let me, I'm telling you with an image:

The human component of the story is essential to bring the message to the brain and heart. I remember the animated film Robots, where despite being machines, robots had human behavior and emotions, what made them close and generated empathy. We need to make sure that the content connects and shows the values of our brand, whether commercial or personal. We need to find the emotional core of the story and its relationship with vision, mission and values.

In corporate storytelling, Scott Davis defines it that way in the referenced book:

If the story doesn't reach your employees, if they are not able to turn it into elevator pitch, if they don't know what role they need to develop to vitalize the brand, you won't feel the brand as your own. In this case, the company wastes a great branding opportunity

No two drops of water are the same. We like to think that to understand that we're essentially different to others. But differentiation should not be an end in itself, but a powerful means to give value to a discourse. Stay hungry, stay foolish (keep your hunger, keep your madness) they're not Steve Jobs' words, but he gave a masterful sense to this invitation to see life differently in his speech to a Stanford University graduate promotion.

Humanization and differentiation go hand in hand. Create pride of belonging. I don't know what Apple employees feel, but I would be more than proud to work for a brand that advocates think differently.

It's the hardest thing. Our goal is to get an idea. A. Among the things I hated about working in advertising, one of the worst is that many clients gave us in the briefing a list with five objectives… Five? In 20 Seconds? Impossible. The good story is the one that manages to convey a central idea and that can be summed up in a few words:

In the century 33, there is a period of civil wars in the galaxy. A rebellious princess, with his family, their custodians and the clan's treasure, is being persecuted. If you can cross the territory controlled by the Empire and reach a friendly planet, will be safe. The Sovereign Knows It and posts a reward for the capture of the princess

Does it ring a bell.? Elements such as the value proposition formats like the one mentioned elevator pitch help to keep the essence when it comes to summarizing and convincing when there is little time.

Related: Working on the value proposition

One discipline that helps simplify concepts is the mind map as a content tree. It forces us to structure the essential parts of a discourse before developing them. In fact, each party supports its own content.

The StoryMaker's Dream. With “viralizable” I haven't found a better word to express that the story has elements attractive enough, surprising and rich enough to expand in the style of a virus or epidemic. As I mentioned before, it's not enough just the simple desire for a story to be viralizable, it would be too easy. Chipotle's case didn't mean it., but the sum of elements (Humanity, Difference, simplicity and ability to transform) he got it.

So, abandons the idea of giving a briefing to a professional or agency with a “I want it to go viral”. That would imply that the viral is manufactured in series, And it's not like that. Depends on the level of transgression of a story. Susan Boyle, a complete unknown, with a scruffy look that wore the word “Failure”, raised to a stage with his singing way on the show Britain's got talent. In this case, the key to the success of the story (more than 150 millions of views on YouTube) was the element of surprise: Boyle broke the limiting beliefs, barriers, the status quo.

This is my favorite. Transformer. That moves to change, that mobilizes, that broadens the vision of something. In Chipotle's video, transformation takes place within the story itself, and the audience assumes it as its own: is the journey of a farmer and rancher to mass production and then the return to the real, to nature. Anyone who sees that ad can change their idea of the convenience of big fast food chains and subscribe to Chipotle's service. And not just because of the sustainability of the planet, by that of each of its inhabitants, people and animals.

I hope this text will help you internalize the keys to a perfect story, or at least as round as possible. I thank those who have helped me better understand the importance of the story, especially to Antonio Nunez, George Lakoff, Daniel Iglesias, Victor Gay Zaragoza, Christian Salmon… and Chipotle, Of course.

11 thoughts on "#Storytelling How to knit the perfect story”