It seems that we get used to disagreement. Read the newspaper every morning ratifies: no dialogue, There is no peace. These last days have experienced particularly serious situations of lack of dialogue: conflict Ukraine perhaps the clearest case, but unfortunately there have been more, as the conflict Coca Cola in Spain with his ALSO I had the opportunity to to write some days ago, what is known as “soberanista Catalan challenge”, the problems of investors preferred in Bankia, the mismatch of Iberdrola has decided not to invest more in Spain…

One might think that all this is hopeless, but he has. When two people are sentenced to terms They stop practicing monologues and paid to dialogue. dialogue means, above all, listen to others, but not only that: is about empathy, get in each other's skin to better understand the complexity of the problem and possible solutions open to. Then would the tolerance, it would respect the opposite position despite not sharing.

It strikes me the ability to find solutions promoting Spanish Minister, Ana Pastor, and his Catalan counterpart, the Minister Santi Vila. In an environment of maximum hostility in relations Spain / Catalonia, Pastor and Vila have been able to empathize and dare to dialogue; as it could not be otherwise, this bears fruit.

The thread of dialogue and empathy, I read on The country a group of entrepreneurs called Barcelona BeAnotherLab It has created an instrument called neuroscience experiments “The machine to be another“, which creates empathy and social measures. The invention, in beta, could be, together with the will to solve things, the remedy to solve the major problems caused by the monologuismo prevailing in our society. Hopefully this team find funding to finish developing your project. Do we imagine Rajoy in the skin of Mas y Mas in Rajoy? Without preconditions, or pressure of any kind?. Pastor and Vila have succeeded, perhaps not so difficult.

The unprecedented crisis of Coca Cola in Spain

To those who never drink Coca-Cola sounds strange to us as everything that is happening in recent months with the brand. On the one hand Coca-Cola has been the aspirational benchmark in communication for many years. Even campaigns are remembered “The spark of life” or the great Christmas campaign 70 “the whole world I want to give a message of peace...” whose video I recovered for the nostalgic.

On the other hand Coca-Cola has always been behind major events, sports, The musicals, national, regional, locales. Coca-Cola achieved the desired positioning a mark on our planet: the brand of happiness.

But just a crisis affecting all quisque, and Coca-Cola is no exception. Marcos de Quinto, director of the brand in Spain and great conversationalist, He said a few days ago from his account Twitter “The ERE Iberian Partners resulting from the fusion of 8 Spanish companies. We support your business logic even if it hurts their labor impact”. The words are beautiful, but recently The Economist stated that The seven former Coca-Cola in Spain -fusionadas today in the new Iberian Partners- They were obtained from 2010 and 2012 a operating profit set 860,9 millions. However, The company justifies the restructuring plan launched, it will affect 1.250 workers and will involve dismissal or early retirement of 750 people, because their profits are shrinking.

Do you lose money Coca-Cola?

Following the Economist, in the first nine months 2013 She earned a profit of 127,5 millions of euros. And not only that. margin, Besides, is increasing. In 2012 was the 50 percent and now, despite the arguments used by the company, It is placed in the 54 percent sales. So we know something, perhaps Coca-Coca has reduced the percentage growth, but nothing is in the red. And many companies would like Ibex 35 have those benefits. It is clear, Coca-Cola does not lose money.

What about the president?

We have read in various media sun Daurella, the president of Coca-Cola Iberian Partners closed 2012 with a personal profit of more than 23 million and shareholders' equity 50,7 millions. But as said Andrés Toledo Puro Marketing, Daurella's reputation is in tatters because of their tax shirking (taxed in Luxembourg).

As expected, social movements and unions are chirping, because they do not understand that a company that has no losses and whose president is nothing in abundance and “deceives” the Spanish tax authorities can organize an ERE affecting 1.250 workers. But this time they have been the social networks which they have heated debate and is beginning to generate an anti-Coca-Coca campaign unprecedented in our country. 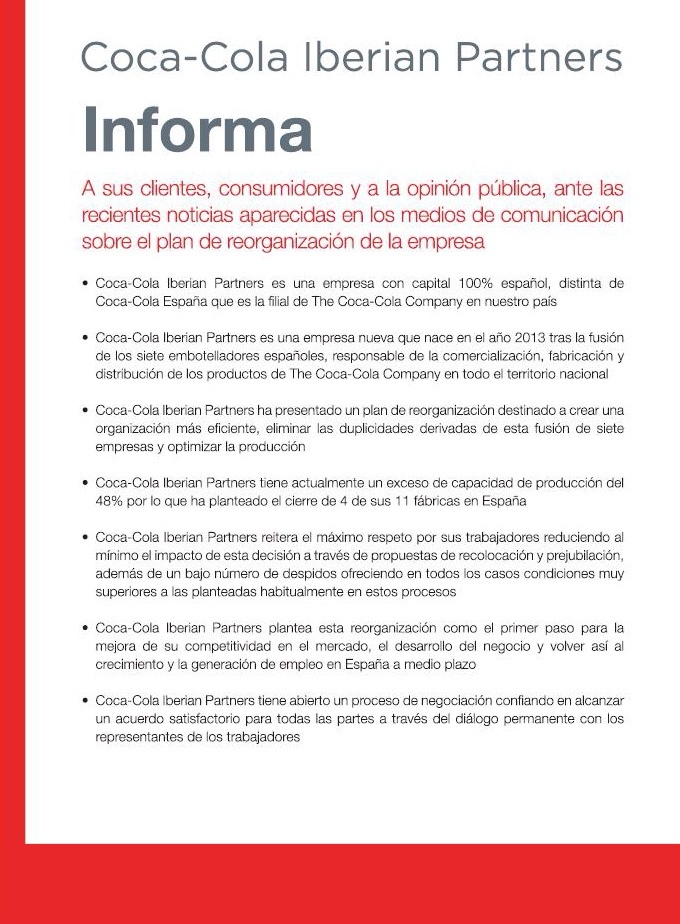 Today Coca-Cola Iberian Partners published this ad to justify its decision ERE: The truth is that it seems to put more fuel to the fire, since I am convinced that the 80% Spaniards did not know the existence of a crisis in Coca-Cola. Plus, the effect derived from his reading does not convince too if you're one of those directly affected by ERE.

The models are reviewed. Is this the beginning of the end of Coca-Cola?

Spaniards have passed the “cubata” the gin and tonic. This reality can not deny anyone. On the other hand, Mediterranean diet recommends unsweetened drinks or carbonated: Water, wine in moderation , juices… The consumption model is reviewed, and the hundreds of millions of euros invested by the brand in recent years can not curb the phenomenon of returning to the consumption of proximity.

Coca-Cola will not die, at least in the short and medium term, but should regain his human side, the side that prompted, to return to enjoy a special place in our minds. As I mentioned in the article published last Friday in Soymimarca Corporate Branding + Personal Branding = Full Branding, useless to mark a major effort in Corporate Branding if the image then give their managers (Personal Branding) not accompanied. Coca-Cola needs to regain its model “Full Branding”, and will not do with advertisements in the press, it will use weapons Attraction marketing and the integration of a model of corporate branding one staff. The die is cast. At the moment, who will think better standing of this crisis is the gin and tonic.

Excerpted from The World: Advertisers should rethink their methods in view of the findings of Martin Lindstrom. Subliminal factor is more important than it seems, according to the new book he exposes sales expert, ‘Buyology‘, a study of how consumers react to the impacts of brands.

For example, and an anti-smoking campaign warns the public of the dangers of smoking, the message, rationally, it makes perfect sense. However, thesis for Lindstrom, It is counterproductive: Get that smokers have more desire to smoke rather than less. 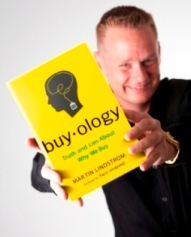 The book 'Buyology: truths and lies about what we buy’ He has needed a three-year and invesigación of ‘neuromarketing’ which it reached seven million dollars (5.436.000 euros), as indicated by the publication 'Advertising Age'. Lindstrom and his team have used the latest neurological techniques 2.000 five different people to decipher the behavior of human beings countries when buying is.

Among its findings, It notes that consumers are not only guided by conscious motivations; also by the subconscious. “Most of the decisions we make every day are performed on a part of the brain in which we are not even aware”, Lindstrom explained.

Responsible for the book and the study wanted to find out “What makes a brand be attractive”, but the response has been complicated. In the case of cigarettes especially. When the the tested subjects were asked whether the warnings of the dangers of snuff work, most of them answered without hesitation: “Why not”. It was the conscious side… your subconscious contradicts.

Actually, The results conclude that, When this question was accompanied by images, smokers were more eager to get a cigarette from his pack.

Another of the most llamtivos research results Lindstrom downplays brand logos, since the book ensures that other senses, as smell or hearing, more often they mark the final decision of consumers.

The study also demystifies the power of 'product placement', the advertising technique consisting of placing a product of a brand in a TV show. In the 'reality' American Idol ', Coke and Ford spent the same amount, but consumers retained much more the image of the beverage company, as it was much more integrated into the action.

The author, whose book has just been published, recommends the 'neuromarketing’ to decipher these secrets, that surely will mark future advertising research.