In the United States most professionals enjoy two weeks of vacation per year. Curiously, It is only advanced economy in the world does not guarantee holiday annual paid. As for economic activity, There is no paralysis of a country whole, They make the holidays as suits them and their companies.

In Mexico, It has established a week of vacation per year, considering that Saturday work; so that then some say that there are not working. In Japan, enjoy ten days of paid annual leave per year, which can reach 20 over time. In China, like in Mexico, one week. Neither in Mexico nor in Japan, nor China is paralyzed nothing. Perhaps in Mexico you can find shops closed key Christmas day, National holidays, locales… little more.

On the other side, countries have more holidays offer workers: France and Finland, with long boring 30 days that followed can be taken 5 weeks. but attention, Nor it is paralyzed anything because everyone agreed the outlet so to avoid having to close down to shops, Companies within a month of the year.

Spain is different: in August paralysis of one country affects all, less the tourism sector

Returning to the bulk of the labor market, that of employed persons, all agree to make the holidays in August, with some exceptions in July. In part the origin of this part of the exaggerated school holidays, no less than three months, between 15 June and 15 of September, forcing parents to choose holidays that peridodo, causing paralysis of a country whole.

In addition to paralysis August, tourists visiting most of the Spanish cities on the weekend are another paralysis. Sunday everything is closed, so I rare exceptions (the center-center of Madrid, for example) it is impossible to shopping. That does not happen in other latitudes, where there is freedom of schedules.

But that does not only affect tourists, It affects all those who can not usually do shopping on weekdays. Your only option is Saturday morning. 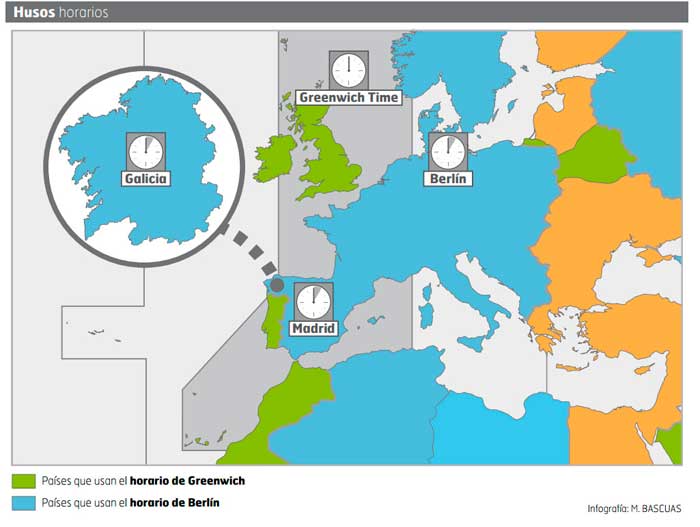 Another feature that stuns our visitors is our time zone.

Did you know that in mainland Spain governs the schedule Franco pact with Hitler and not corresponding to its meridian?

Crazy. Even though the Spanish democracy, dating from 1978, take longer 40 years old , no repeat, no one- has proposed returned to Spain the schedule that corresponds to be located in the Greenwich meridian, Pure GMT (and not GMT +1 of Berlin). Eye, The same applies to France.

In addition, offices in Spain not emptied before 19 a 20h (It is frowned upon by the bosses most miserable). And that's just the time when you dine in many nearby countries, like France, Netherland, Switzerland… So, in Spain when dinner is between 21:30 and 10:30h.PM. The prime time TV is not 20h or 21h to, It is at 23h. Of course, Many mornings wake up at 8am and go without breakfast just the job. Impossible to reconcile do not you think?

A utopian proposal to regain health (and sanity)

Like this post, for the day is published (Sunday) and the date (near August) you are going to see few people, Here I launched a proposal to recover the tone and avoid paralysis of a country and its bad image in the world.

“Use your mentality. Wake up to reality”

Paraphrasing the song “I’ve got you under my skin” written by Cole Porter and popularized by Frank Sinatra, I use my mind, and wake up to reality. All the above is more than utopian. It will not happen, or at least I will not see. Today I read that the world tends toward conservatism politically. So goodbye reconciliation policies, of environmental protection, liberalization of trade, exports, collaborative economy. Come back. But dreaming is free. Perhaps soon I will not see as people do not face pasmo he stays when I say I get up at 6AM for sports… and I go to bed shortly after 22h. Good week, even if you contribute to the paralysis of a country (ah, and enjoy the pace of “the voice”).

Shut down image by Frank Boston on Shutterstock.com