Review appeared in EQUIPMENT AND TALENT

self-knowledge, and visibility strategy, the keys to building an attractive brand

Does the online image of a professional is as important as offline? How important plays in improving employability? Viadeo along with Guillem Recolons, personal branding expert and co-founder SoyMiMarca, They have presented the keys to building, improve and enhance the brand that projects an individual personal and professional level, both online and offline.

In this sense, Guillem Recolons noted: “The strategic goal of personal branding is to help us visualize where we want to be in ten years and learn to use the tools to reach that destination”. Thus, Recolons has highlighted three key steps for creating professional positioning we want:

self-knowledge: It is important to start by asking yourself some questions about our current situation. Who I am? What are my skills? How far my education and training arrives?
Strategy: How do others see me? How did I get here? What is my competition? What I want to achieve target? Once we have an accurate idea of ​​how we see ourselves and how we see, we are in a position to raise the best strategy for our positioning.
Visibility: It is time to start communicating our mission, vision and values, as if it were a business, and build our personal brand.

Likewise, Recolons stressed the need to work the message we convey and how we do. Bearing in mind that our brand communication occurs in any context, either offline level (on a business card, a networking session, el popular ‘elevator speech’, among others) as online (social networks, professional and nonprofessional, blogs, Online Reputation, among others).

past 13 and 15 They may took place in Madrid and Barcelona respectively monographs on low cost under the title “The low cost business model and the main strategic options competitors”. The conference addressed ESADE alumni, and the truth is that both sessions were a success both in terms of attendance and interest. The teacher in charge of the talk, Michele Quintano, It was helped to describe Guillem Recolons model TvLowCost.

The main objective of the session was to demonstrate that the low cost business model "moves away from the concept of low price and is something different", as expressed Michele Quintano, Visiting Professor of the Department of Marketing, which started from the idea that low cost "is to raise, through innovation, new production processes and marketing of products and services ", where not necessarily must link low low valor.En first, Professor Quintano said the traditional model of "low price" with typical examples as the discount in the distribution of consumer goods, white markings, promotions, etc., where there is a direct relationship between price and quality in the field of expectations. However, The low cost is a new model that "attempts to eliminate all the costs of complexity (differentiation)”, where selling prices are lowered but, at the same time, "It is being offered value and enhances consumer satisfaction". Among the key aspects of this model, Quintano highlighted the optimization of processes (information management, distribution, e-business, etc.), which ensures the maintenance of high quality standards, although prices are reduced.

Quintano also alluded to the various sectors in which companies apply the business model (transport, insurance and banking, car, fashion, furniture, information technology and pharmaceutical sector, among others) and said that they "have contributed to the increase in the size of mature markets". After reviewing examples, It focused on low cost airlines and formulas they use to ensure a reduction in costs and prices without sacrificing the quality of their services as, for example, the point-to-point or price adjustment to demand easyJet or Ryanair performing. In the same line, He reviewed other cases of interest (Dacia, ING Direct, IKEA and Línea Directa Aseguradora) differentiated by applying business concept. 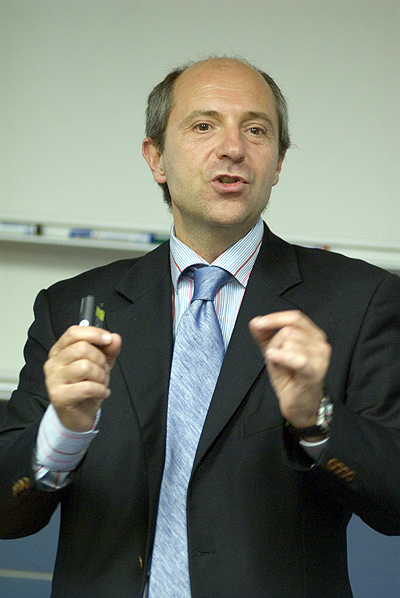 Then, Guillem Recolons He spoke continuing with the analysis of the concept, noting that "the low cost is an attitude, because basically no longer be a smart purchase influenced by the values ​​that each person gives the services involved in the buying process ". On the other hand, He highlighted the dichotomy between the positioning of companies using this model, as Zara IKEA, and consumer perception thereof.

Later, Recolons recounted how the idea originated TVLowCost, "In an apparent gap in the market", in an environment characterized by the existence of two types of advertising companies: on the one hand, agencies belonging to large multinational, which they offer expensive services and, for another, local small businesses, usually unable to project beyond its scope. Thus was born this initiative, "Which it is embodied by a vehicle: the all-inclusive pack ", with a range of preset services (for example, a campaign on national television, production, Research and fees included, no monthly fee), at a very attractive price.

Likewise, the founder of the multinational partner TVLowCost said the goal is not to compete with the big agencies, but "generate a new market", addressing those companies with revenue between ten million and thirty million so far had not raised the use of television to advertise because, as usual, They have a significant budget barrier. Its formula is nothing but a set of variables appropriately combined, as expertise in television, minimal structure itself-and the consequent outsourcing of creative high level-, presenting multiple creative proposals or the maximum use of new technologies and the Internet.

To end the session, Guillem Recolons said several examples of commercials made by TVLowCost, where attendees could learn simple productions and different formats designed for midsize businesses.