What were you doing in 2004 when you dialed in Internet?

Possibly you read the email and you visited any web. You comunicabas with your closest friends perhaps also with some mail.

How do you dialed Internet?

I think we all know the answers. The world has changed radically in 10 years old . The concept of 2.0 the participatory web, progress in 1999 P0R the four visionaries who wrote the manifesto Cluetrain (Fredrick Levine, Christopher Locke, Doc Searls y David Weinberger) It started shortly after the blogs as the first interactive phenomenon and was in 2004 when the student Mark Zuckerberg I believe Facebook to develop a new online community, initially directed to college students. This year marks 10 years that milestone. Today is the most popular social network in the world with 1.110 million users registered.

To understand the scope of the network par excellence, heartily recommend if you have yet seen urgently rent the movie David Fincher “The social network”, It is including beads as “are not made 500 million friends without making a few enemies“. Although Facebook has entered its maturity stage (Some talk of decline), the truth is that this network has been the lever other networks today are growing rapidly, as Twitter, Linkedin, Google+ and hundreds more networks.

Facebook has changed the way we relate with others, and I say positive. To friends lifelong those we continue to see in the real world. But Facebook has allowed impossible encounters with people who have emotionally alive in memory but the distance or time had forgotten. That alone is already worth having a profile. We have more information and coolest people we care.

If at first Facebook grew timidly, the explosion of smartphones that took place from 2004, but especially the launch of the first iPhone on 2007 They allowed access to the network without going through internet, making directly from an application and all the mobility that allow 3G signals from telephone operators.

Of course “Dospuntocerolandia” (stolen expression of good friend Andrés Pérez Ortega) It is more than Facebook, but it was Zuckerberg who laid the foundation stone, Apple who turned the network into a mobile phenomenon thanks to the iPhone and possibly Whatsapp who democratized the use of SmartPhones.

Despite data indicating that young people away from Facebook, I believe that humanity is indebted to Mark Zuckerberg, and from here my congratulations on this tenth anniversary.

The news of the IPO of Facebook will generate a value to the company 88.000 millions of dollars, a record in a dotcom since valued at Google by 23.000 million 2004. 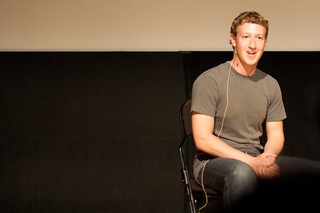 It is clear that now all we can own a piece of Facebook, But that's not the point. The question is what will Zuckerberg with near 11.000 million dollars you can report this IPO. Be a little richer, yes, It is clear. But what will you do, which company will buy… Are you dare to Yahoo? Who will be the candidate?.

We have recently learned that Apple, the first market capitalization of the world, He has decided to distribute dividends to its shareholders. With that and you notice that Steve Jobs is not, because he sure had used the profits to buy other companies that do grow Apple. How Apple will grow now? Surely slower.

Clearly a Facebook IPO force Zuckerberg to grow steadily, and that means significant investments. That's probably why goes public, because it already has in mind buying a company key.

If you have not seen I recommend you go see ‘The social network‘, the film on Facebook the author of "Fight Club" David Fincher.

It is not a documentary film cutting. to get started, surrounds the curiosity and controversy was not authorized by the creator of Facebook, Mark Zuckerberg. The ambition, betrayal and loneliness are the ingredients of the story of a Harvard University with poor social skills and much IT talent that is willing to do anything to achieve his goal, although even he himself seems to be clear what it is.

In the complex path to success, Zuckerberg making difficult decisions and questionable ethics, what makes the film is enriched with sublime dialogues.

The argument rests on the legal battles over ownership of the social network to which he confronted Zuckerberg years after creating Facebook in his room at Harvard and he was forced to pay tens of millions of dollars to prevent disputes from reaching the courts.

Beyond the film, what is certain is that Facebook controls over 500 million personal brands, some with more complete profiles than others. That's no joke, is the largest bulletin board history.

Here I leave a movie trailer: