If you have just a minute, here's a video summary (in Spanish):

Disadvantages of exposing me, the negative side of personal storytelling

I'll be direct: exposing myself is tantamount to undressing. At least in a metaphorical sense. It means revealing moments of my life that perhaps many people do not know. It means showing vulnerabilities, fears, doubts, failures, weaknesses. Why not, exposing myself requires courage .

Perhaps for those of my generation, exposing myself is unnatural. They told us to be discreet, that information is power, and that it had to be managed well. The children of the Cold War grew up with spy movies. The spy was no more than someone who knew how to obtain information at the risk of his life for it. Well, and it still is...

Advantages of exposing myself, a way to accelerate empathy

Why not, exposing yourself - properly -- also it has its advantages. It means transmiting personal values, communicating the personal story. Explaining a lot of why, a lot of hows, a lot of whats. Make it clear whether we will fit in with one project or another, with one team or another.

The big question that comes to mind to stage the advantage of exposing me is this: Why should you trust me if you don't know what moves me, what makes me get out of bed every day? Professional relationships no longer only revolve around a value proposition, there is a human being behind it purpose and values that act as pillars.

I have been a naive for a long time; and possibly that will accompany me until the end. For years, I have relied on people guided solely by their skills. And I haven't always been right. Now I'm clear. I buy your personal story, your emotional DNA, your way of seeing the world and wanting to change it. Your way of understanding others. And I hope you do the same with me..

As Sting says, "sé tu mismo, no importan lo que digan” (be yourself, no matter what they say). That way you will connect, you will transmit confidence. Another question is how to expose me. I would say that dozens of selfies in the WC don't matter to anyone. Neither the chronic jinx, the pathological pessimist or the one who replicates what others say without proposing a story and a proposal of his own. Working on the personal story is a nice challenge. I invite you to share it.

Photo by Glen Carrie on Unsplash

Today I learned that he died Manuel Miguel Hernández Pujadas, Coach, consultant, University professor, mentor, adviser, change manager, communicator and strategist. I met him at 2016 as one of the speakers of TEDx Lleida. We shared stage, nerves and laughter.

I can only tell you what you said at the end of your talk, "May the Force be with you". And I can do more, leave here your legacy in the form of a talk about the secrets of good communication. Have a good trip, my friend!

Why did you study what you studied? Why did you start in this business your first job? When I ask about the trigger for career people often go blank.

The usual answer, when it emerges, I am "do not know". “I studied it because it's what I did best”. O "it was the first company that accepted me as a candidate". I do not believe it. There is always a trigger, even if it is deposited in our subconscious.

If you do not like the word detonator, some military, you can change it to "catalyst" or “driving”. But in any case there is always something that drives us to do what we do.

When weapons your story, the trigger is a key element. I usually distinguish the idealistic impulse momentum channeler.

the idealist, as the name suggests, It is often based on a childhood dream: I will doctor to save lives, I'll cop to kill "bad guys", I will be like my father trader, I will be president of my country so that no one goes hungry and all live better. Yes sounds utopian, But does a child wants to be a politician can be president? Or a nurse may be a surgeon? Children think big. It's a shame that first ambition is lost as we mature.

The channeler impulse is to take you to the first firm decision on the type of studies to study or to take you to your first payroll in an organization.

For example, my idealistic impulse was composed of early passion for photography, music and nonverbal forms of communication, but especially by the admiration that made me see the British physicist Stephen Hawking communicate using a primary computer system. Hawking could give up talking, moving his legs, but not to communicate.

Years later my Utopian thoughts, on 1993, BT (British Telecom) launched a corporate ad with music by Pink Floyd and insight Hawking I should be written on the forehead of our leaders:

For millions of years, mankind lived just like the animals. Then something happened which unleashed the power of our imagination. We learned to talk and we learned to listen. Speech has allowed the communication of ideas, enabling human beings to work together to build the impossible. Mankind’s greatest achievements have come about by talking, and its greatest failures by not talking. It doesn’t have to be like this. Our greatest hopes could become reality in the future. With the technology at our disposal, the possibilities are unbounded. All we need to do is make sure we keep talking.

For millions of years, humanity lived like animals. Then something happened which unleashed the power of our imagination. We learned to speak and learned to listen. Speech has allowed the communication of ideas, making it easier for humans to work together to build the impossible. The greatest achievements of mankind have occurred when speaking; its greatest failures by not doing so. It should not be like that. Our greatest hopes could become reality in the future. With technology at our disposal, the possibilities are limitless. All we have to do is make sure we keep the dialogue. 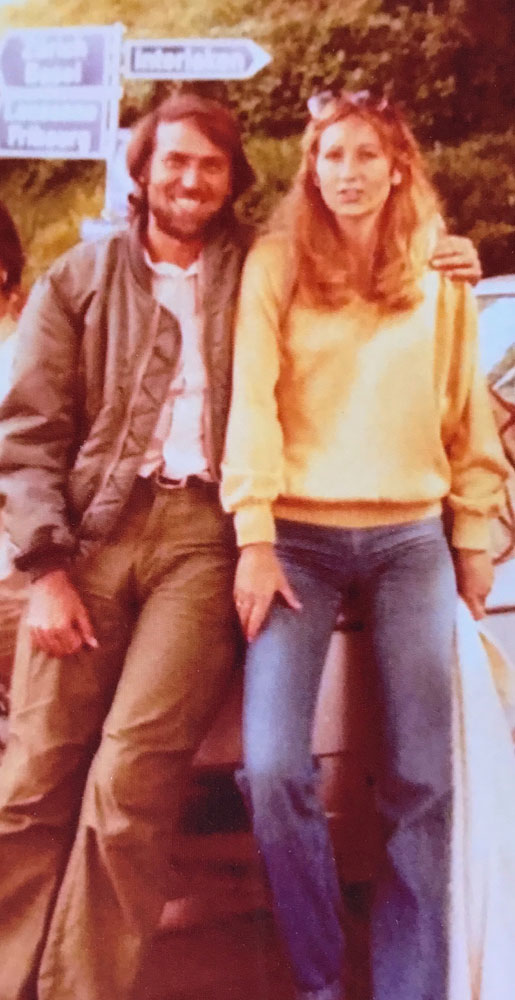 The channeler impulse is the action plan. Once you've decided which of your childhood fantasies might see the light, you need to activate the necessary springs to reality.

In my case, It was the couple that you see in this photograph. my uncles, should run the year 1977 (I with 15 years old ) when this photograph was taken. They used to move in a vintage bike that call today, a NSU of which I think there are few specimens in the world. They were an unusual couple for the time: light-hearted way of dressing, the hairstyle. I do not know if it was the perfect match, but it was a good model in which inspiration. I soon learned that they were advertising. Elena had a fleeting passage by advertising, but Paco Miret was and remains one of the great creative advertising.

Paco worked at Tiempo BBDO, one of the great Spanish agencies and one of the top 10 world. They needed an assistant to the art studio. And that was me. Known photographic techniques (in my house I always developing equipment) and what fascinated me about the design.

My first payroll is January 1979, in Tiempo BBDO. 5.000 pesetas per month (about 30 €). Had 16 years old . Professional category: buttons. Today, with long boring 55, I'm still advertising, although I have changed the way to strengthen brands. I am now convinced that should be done through people. That's why I work in personal branding.

You look like a fantasy childhood or youth can determine your career and build your first passions.

I like to remember the words of psychologist Carl Jung:

I am not what happened to me, I am what I choose to be

I'll ask again what is your trigger?