Two months ago I was in Lleida to witness the TEDxLleida 2018. There was of Pau Samo, who told me he had given witness to the organization Montse Diaz after three years of success as an organizer and licensee in Lleida and two in Amposta. The ideas contained in the papers this year loved, and stressed especially:

Birth of a new TED: TEDxEixample

Pau told me he wanted to talk to me in a few days in Barcelona, I had a proposal for me. Said and done, a few days later he told me that he had gotten a license “big” for a new TED in Barcelona that would take the name of the most emblematic district, the Eixample, the brainchild of Ildefons Cerda, engineer, urbanist, lawyer, Catalan economist and politician SXIX.

And that was not all. Pau told me to go ahead with this new challenge. With me, and some more, of course. Newsmaker. I could'nt believe it. I had been on stage two years ago TEDx Lleida, with a Talk about super powers (core values). And I saw how complex and exciting to organize a TEDx. A year of work consumed in a magical evening.

Emotional payment of a volunteer

I've always thought that a volunteer does not charge money, cobra emotional benefits, to see that other people can minimally improve their lives because of your time. And TED is that, a non-profit. And also the TEDx licenses that were created in 2009, raised as independent events (in fact, the "x" means "organized act independently).

In TEDx not charge the organizing team, They do not charge the speakers, and it is intended that the costs involved in the event (space, video and sound, Photography, catering, travel and subsistence expenses of speakers, web, social networks, acreditaciones) They are covered between sponsors and attendees entries.

I prefer to call them drivers of ideas

The word sponsor is me short when it comes to boosting ideas that can change the world. So I prefer to see them as enablers, as promoters of ideas. To bring speakers to expose ideas worth sharing requires a small investment, and not for what they charge (TEDx remember not paid its rapporteurs), is the cost of organizing the event.

If you are reading this and know impellers ideas, please, Tell them to go through the contact section of the website TEDxEixample.

Culture as a framework for the first edition

We did not have to discuss what would be the theme of the first edition: Culture. Barcelona's Eixample is a cultural engine, there is La Pedrera, The Fundació Tàpies, Palau Robert, Batllo house, House Punxes, Casa Elizalde, The Holy Family, the Hospital de Sant Pau… Poetry, town planning, architecture, culture, painting, literature, music, Photography, dance, film will star the # TEDxEixample19.

Proud to be part of a team

Perhaps this is the best part, Finding a collaborative environment of people armed to the teeth of motivation. We will not be creators of ideas, but believers, and we'll give everything so that in the first edition, expected (even without closed date) for spring 2019, a success. The measure of success is not money sponsorship, or the number of attendees, is the quality and capacity to mobilize ideas to be exposed.

A pleasure to share many days of illusion (and pressure, why deny) Pau Samo, Robert Ferrer, Rubén G. Castro, Carmen Gibert and Helena Casas, those who will join more, definitely.

In this TEDXEixample official website You can find more information. And finally, I leave you with one of my favorite TED talks, that will make you lift chair, to the Julian Treasure “Talking to listen to us”. A marvel. Have a nice week!

I confess that I never believed it too much for first impressions. Phrases like "You never get a second chance to make a good first impression", or "face is the mirror of the soul" strike me as trivial in the context of brand management, either corporate or personal.

And one reason not to believe is that there seemed no scientific evidence to show such a level of transience in the sense of judging in a few seconds. So, everything was in an aesthetic assumption.

A few years ago I heard for the first time psicomorfología, a widely used technique in human resources with a simple photograph allows a specialized psychologist can draw a profile of the candidate and extracting personality traits. But although they have written books and treatises on the subject, the fact is that the level of precision is low, and employers often cheat.

The key is confidence

Going beyond belief and subciencias, a few days ago I came across an article Business Insider that illuminated my understanding of the "first impression". According to the article, psychologist and professor at Harvard University Amy Cuddy argues that a quick first print gets determine the level of trust and to a lesser extent the level of competition. I like that, that justifies an acceptance or rejection on first impression, especially trust.

You remember when you were 5 or 6 seleccionabas years at a family reunion who wanted to say hello and who you preferred to flee? Why not, It is pure instinct, but not based on aesthetic criteria or pleasantness but based on trust. I trust this person, then I approach it without fear; I do not trust this, I prefer to neglect it. If the first question is whether you can trust someone, the second according Cuddy- referred to competition if that person is you commands respect.

That's not an opinion, It is findings of studies over more than fifteen years by a group of psychologists, and certainly I suggest that the first impression does not judge how beautiful or ugly we are, judges whether inspire trust and respect.

Your brand starts with confidence

This statement may make more sense apparently seen in the article by Business Insider and a fantastic TED the same Amy Cuddy (highly recommended). The first trial, in tenths, It is based on trust and respect.

Why we insist so much on putting pictures on our profiles?

Because the absence of photography equivalent to a negative judgment, lack of trust and respect. The second question would be whether we can "manipulate" a photograph to inspire greater confidence. possibly not, but I think-and this I strongly agree with specialist personal brand image María A. Sánchez– we can eliminate distractions so that people see in us what we want to see, without further ado.

I explain in formations often an anecdote referring to a photograph that I used for some time, tanto offline (the back of card) and Internet. 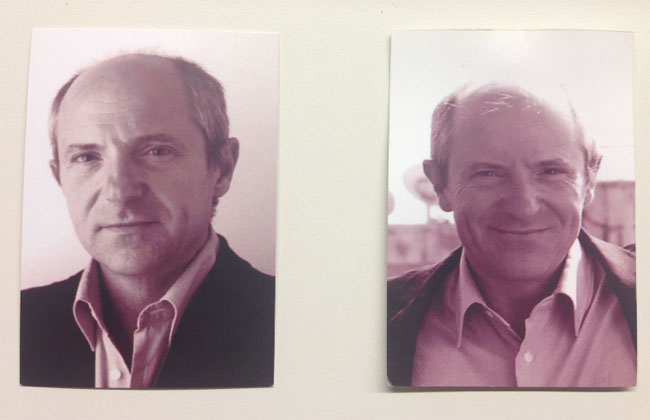 Perhaps because young looked like a child, there was always endeavored appear in photographs with rictus of some seriousness. I remember the wonderful portraits Alberto Schommer who managed to pass the mark of character in a captivating way, cold, implacable.

But what happened to the photograph which I speak (The one of the left) is that apparently conveyed an image of little confidence about me. So I did know a client after a few minutes chatting with him to meet and overcome the first impression. He confessed that a priori expect to meet with any other colleague before me, and it based its expectation on my profile picture.

Without thinking twice, I changed the photo on the other performed during the same session, a portrait that best conveys how I am. Now, almost five years later, and thanks to the findings of Amy Cuddy, I can know what happened with that first picture: He did not inspire confidence.